Why Supply Chain Small Businesses Should Hold Off on Blockchain

Blockchain has seen success in large-scale supply chain businesses, but it may still be early for small and medium-sized businesses to jump on this trend.

This technology has been coveted and praised by many supply chain companies for its ability to streamline operations in a secure fashion. That potential and the opportunity for innovation are contributing factors in blockchain’s significant increase in popularity over the last few years.

While integrating aspects of blockchain into your business may sound appealing, it may still be too early in the game for you to get a solid return on your investment.

This article will examine the state of the technology in the current supply chain market, revealing the risks associated with jumping on the blockchain bandwagon.

In the scope of blockchain in business, we’re still in very early years with the technology. Blockchain technologies didn’t begin gaining traction outside of Bitcoin until around 2014. With only about 5 years of familiarity, many haven’t had the time to harness its capabilities to construct a more robust operation.

The core of this issue is that our expectations for blockchain typically do not align with reality.

“Many CIOs overestimate the capabilities and short-term benefits of blockchain as a technology to help them achieve their business goals, thus creating unrealistic expectations when assessing offerings from blockchain platform vendors and service providers.”

The same press release indicated that 90% of current enterprise blockchain implementations will need to be replaced by 2021 in order to maintain security standards and a competitive edge.

In its early days, blockchain is constantly growing and changing. Unfortunately, it’s likely that your current blockchain platform will be relatively obsolete in 18 months.

Gartner’s research also evaluated that blockchain technology as a whole still remains in an “experimentation phase.” In other words, large enterprises are trying to use blockchain for increased efficiency and security, but few are able to engage the technology beyondtrial and error tests.

With time, many of these problems will be minimized, and you can make the decision to add blockchain into your supply chain operations with more confidence.

In order to effectively benefit from the implementation of blockchain, you’ll need to understand and be willing to join consortia.

According to a 2019 Deloitte survey, people are beginning to think more practically about integrating blockchain into business this year over last. However, the research also discusses several hang-ups that business leaders struggle with relating to the technology. 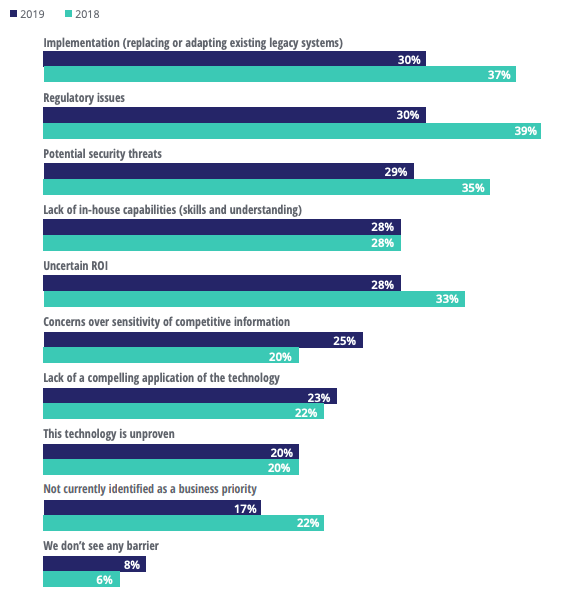 Some of the greatest hurdles surrounding blockchain include struggles with implementation, regulatory issues, and potential security threats.

However, the research speculates that effectively joining consortia may be the most pressing challenge for companies looking to employ blockchain.

Consortia is the cooperation between several organizations that work together including with competitors to achieve a successful blockchain experience. While this allows you to share the risks of implementing newer technologies, you also have to make sure you’re joining a consortium that meets your needs.

For instance, before joining, ask how the consortium is funded, what the governance structure is, what the risk factors are, and about the group’s main goals that inspire  their working together.

With the first shipment made using blockchain occurring in 2016, logistics consortia exist and appear to be helpful. However, they’re also few and far between, especially for smaller companies.

Joining a consortium that makes sense for your business may be quite difficult, given the current state of blockchain in the supply chain logistics sector.

It’s no secret that blockchain technology is complex and difficult for beginners to understand. It requires a new vernacular and way of thinking about technological issues.

While there is typically little interaction between the blockchain database and your personnel, it’s important to note the significant damage that human error can do to the functionality of the technology.

A distributed grid of nodes requiring large volumes of users, blockchain technology is not saved from data import errors due to its distributed quality. Just like a centralized system, the data entered into a blockchain backend will be assumed as true within the system.

For this reason, an error somewhere in the chain has the power to corrupt the entire system.

Additionally, other system flaws like the 51% attack pose potential problems for blockchain adopters. In this case, if a user has control of over half of the system’s network, they’re able to block or reverse transactions. While this is most common in the Bitcoin community, there have been cases of similar malicious activity in other fields.

Blockchain administrators are figuring out how to manage these issues, but they still may threaten businesses wanting to enter the space.

Make Sure Blockchain is the Right Solution for Your Business

While blockchain is trendy, innovative, and a prime opportunity for companies to differentiate themselves in the highly-competitive supply chain space, it’s important to consider the difficulties that come with blockchain adoption.

Understand that the technology is still evolving, changing drastically each year. While this is exciting, you may not want to have to invest in a system replacement in 2 years.

Theoretically, consortia is a helpful way to organize and cooperate to integrate blockchain. However, there are many considerations that need to be made before joining that may put a strain on company values.

Lastly, the overall complexity of blockchain leaves your system open to human error, implementation problems, and malicious users. Think about these threats before walking blindly toward a blockchain solution.

By understanding these factors, your expectations for a blockchain solution are more likely to be in line with reality.

About the Author: SnapRetail Guest